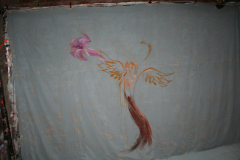 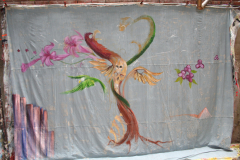 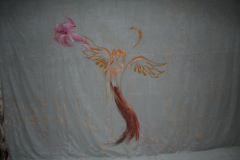 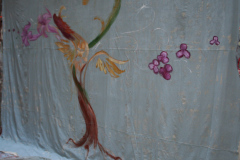 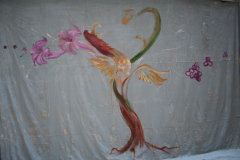 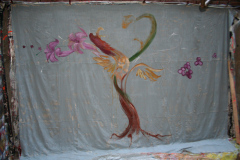 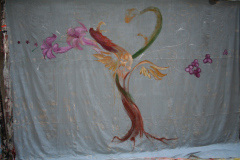 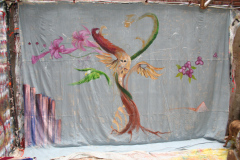 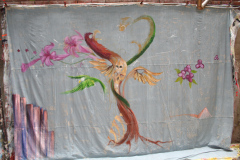 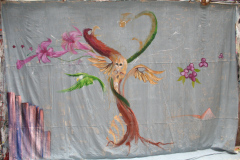 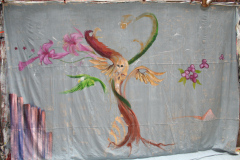 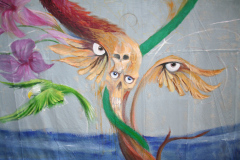 art.les.nyc studios presents Tony Santana as our October 2007 featured artist. a self taught artist, Mr Santana has worked in a variety of media, from artistic landscapes of Manhattan rooftops to creating the famed Rock’n’Roll window displays of the old Tower Records in the East Village. the totality of Mr. Santana’s experiences are felt in the brushstrokes of his paintings. His “Untitled” work invokes a magical world of folkloric belief – an alchemic representation of the philosophy and physiology of what makes us human beings.

​I was born in the Bronx to the critical acclaim of my parents. As I mastered the art of play I acquired a skill with crayons. I hated going outside the lines. In the first grade I got upset because there was no ‘flesh’ colored crayon to complete my picture of Columbus. I wound up using orange. I was a temperamental artist. I was on my way.

​Cut to the 70s. I made friends with other like minded kids who either drew a lot or poked and choked various instruments of the musical variety. I started making money by painting album covers and tattoo type shit on the back of denim jackets.

​Then I discovered Manhattan and the art on the streets. I began doing hand drawn posters in collaboration with some other artistical type friends and, in the stealth of night, posted them all over lower Manhattan on abandoned buildings, construction awnings and alley ways.

Anywhere that art is not “supposed” to be. Art galleries were a favorite target, (to let them know what they were missing.) Most of the posters were done on newspapers in chalk pastel, including pictures, poems, political statements…all the news that fit the print.

Some works were collaborative jams. Two of these wound up being published in a book of street art titled ‘Soho Walls / Beyond Graffiti’.